F5 Technical Director Mark Potter was part of the British Maccabi Staff which competed in the 2005 Maccabi Games.

As consultant coach to the four team Managers (Senior, Open, Under 18 and Under 16) Mark worked throughout the preparation period with Under 16 Team Manager Andy Zeller to prepare the youngest age group squad.

Most of the boys started their Futsal journey as 13 and 14 year olds, and received direct coaching by Mark every few weeks, with a structured programme being followed between sessions.

The boys travelled to Israel to participate in the Maccabi Games, the one of largest multi sports event in the World, over a 4 week period. They played 8 games in a 10-day period, beating Spain and Israel amongst others, losing only to Brazil and Argentina in close fought affairs. The tremendous efforts of the players resulted in the Maccabi GB Under 16 team becoming the first British football or futsal team to win a medal at the games.

Team Manager Andy Zeller had this to say;

I was delighted to secure Mark’s services for our junior futsal team and have now had the privilege of working alongside him during the preparation for and participation in several international youth tournaments.

Mark has consistently demonstrated a tremendous ability to impart his technical and tactical knowledge in a way that allows for individual development within a team framework.

He has an unparalleled enthusiasm for the game which is infectious and readily transmits to the players and those working alongside him. This makes it fun for everyone involved as well as an excellent learning environment .

I would have no hesitation in recommending Mark and his coaching staff to any futsal team who are looking to develop and improve.

The scale of the event in Israel, held every 4 years, was breathtaking – and the commitment of the staff of Team GB and the players from across the country was instrumental in securing the Bronze medal.

Most of the boys initially tried out for the football squad in the summer of 2004 but with Andy and myself at the trials, we quickly identified the boys we felt could develop the necessary skills required for Futsal. There was something of a “tug-of-war” for many of the boys, but the squad of 12 was gathered and we were delighted with the group. We started working with them in September every three to four weeks between September and the following Summer. For most, there was no prior knowledge of Futsal so every aspect of the game had to be covered. The boys won most of their matches in Israel quite comfortably, helped by some great teamwork, individual skills and two excellent goalkeepers, and were only defeated by Brazil 3-2 and Argentina 5-1. Both of those teams obviously have a larger pool of players and greater heritage in futsal but everyone was impressed by the way the boys acquitted themselves.

The thrill of winning the Bronze medal was excellent, given the journey the team embarked upon and it was a proud moment for the staff to see the boys collecting their trophies. 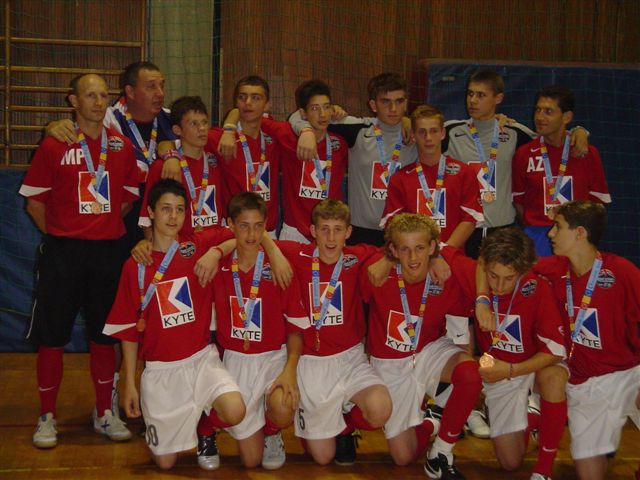